The newly configured system allows more flexible scheduling of pumping.  Re-pumping which was previously required, has been eliminated in the new combined system.  The Township now has five sources of water for the combined system enabling them to use the lowest cost and highest quality sources in favor of less efficient wells.  The Department of Public Works reports electric savings of 12 percent up to 29 percent compared to previous system electric use.

Plumstead Township, Bucks County, PA includes 23 square miles.  The Township owns and operates several independent water systems which were developed to serve individual subdivision communities.  They were independently designed and built along with the subdivisions which they serve.  Once the construction of each of the subdivisions was completed, the water systems were dedicated to the Township.  Once dedicated, the Township assumes responsibility for all aspects of the facility.  The Township serves about 2,100 customers.  Approximately 99 percent of the customers are residential, less than 1 percent of the customers are commercial.  Prior to May of 2011, before the implementation of the projects that are described in this document, Plumstead Township operated the following independent water systems:

The Township Manager, Public Works Director and Water System Operator (Private Utility Enterprises – PUE), all wanted to simplify the operation of their water system.  In addition, the Township wanted to better serve the Landis Greene subdivision which was served from the Cabin Run system.  The Township was receiving low pressure complaints from the Landis Greene service area.  The Township decided that if the system was going to be upgraded, they would make improved system reliability and improved pressure to the Landis Greene service area primary goals.  At this point in the process, reducing electric costs was not identified as a goal.  The Township began the planning process which lasted over 10 years.  Several concepts to expand and interconnect the Cabin Run and Country Greene systems were proposed and evaluated by Township executives and the elected Board of Supervisors.  Figure 1 demonstrates the Country Greene and Cabin Run systems schematically.

Finally, a concept was selected based on cost and overall benefit to the Township.  The design concept included an upgrade to the existing supervisory control and data acquisition (SCADA) system. The designs to upgrade the infrastructure (pipe, pumps, and tanks) were separated into three projects.  Two of the projects included a General Construction and an Electrical Construction component. 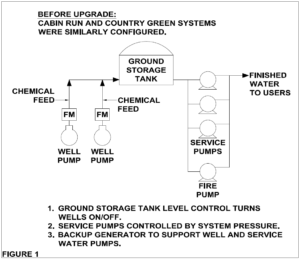 Another project included a General Construction component only.  The implementation of the projects was to be phased to minimize disruption to system operations.  None of the projects included the planned SCADA upgrade.  Figure 2 demonstrates the integration of the Cabin Run, Country Greene, and Landis Greene systems.

The Township decided to hire an engineering firm that specialized in SCADA to upgrade the independent SCADA systems that were distributed throughout the entire Township water system.  Instrumentation, Control & Energy Engineering, LLC (IC&EE) was selected to design the SCADA project.  IC&EE first met with the Township Director of Public Works, and PUE, the System Operator, to establish project goals.  The following goals were identified: 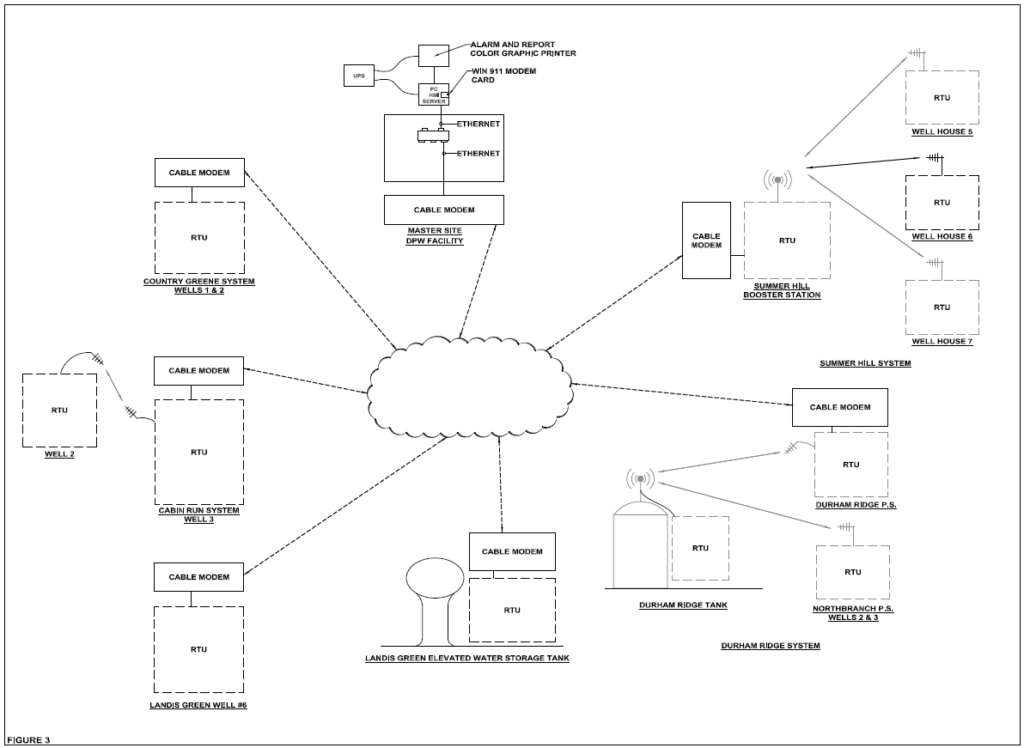 Description of the Projects

The Country Greene and Cabin Run systems were combined along with the construction of the Landis Greene elevated water storage tank and Landis Greene well into a single integrated water production and distribution system.  An interconnecting water main was constructed, however, the Country Greene and Cabin Run systems were operated independently until construction of the first three projects was completed.  The third phase of the project included replacing the well pump motors of the Country Greene and Cabin Run Systems with larger horsepower motors.  The pumps were not replaced, only the motors were replaced.  The replacement motors enabled the well pumps to operate at a greater head which is required to satisfy the reconfigured system hydraulics.  Other improvements included reconfiguration of the piping at the Cabin Run and Country Greene booster stations.  The reconfigured piping provided for required chlorine contact time to achieve disinfection and elimination of the ground water storage tanks and booster pumps and controls.  In addition, chlorine residual analyzers and recording devices were added to each of the well pump stations.

The fourth project, a SCADA system implementation, was bid March, 2012.  The Contract was awarded for $255,000.  The project included 12 remote sites and a master site which is located at the Public Works facility in the office of the Director.  The result of the first three construction projects was a water system with five wells which could be operated based on system demand, well level, well water quality, and cost of operation.  The integrated water system was to be controlled by the equipment and software implemented by the fourth project.  The first three projects did not include improvements to the Summer Hill water system or the Durham Ridge / Northbranch systems.  The fourth project (SCADA System) provided for monitoring and control of the Summer Hill, the Durham Ridge / Northbranch and the combined Cabin Run /Country Greene / Landis Greene system.  The SCADA project also included equipment and instrument upgrades at the Summer Hill and Durham Ridge / Northbranch sites. These upgrades included installing variable speed drives on existing pumps, installing pressure, flow, chlorine residual and level monitoring instrumentation and incorporating paperless recorders at several of the sites.

Prior to implementation of the SCADA system, operators needed to visit each site to collect data.  The systems had telephone dialing alarms to call operators in the event of serious problems, but normal operations were not visible to the system operators.  With the completion of the SCADA system, all data became available at the Department of Public Works office.  Operators now have access to equipment statuses, system pressures, levels, and current alarms.  They can run reports with daily flows as well as run hours for system pumps and equipment.  Operators with the proper security have access to the system from remote locations as well.  The SCADA system provides graphics displays for all system locations from any site in the system.

The implementation of these four projects resulted in the addition of one well and the elimination of five variable speed service pumps.  One of the well pumps in the Summer Hill System was only able to be operated manually prior to the implementation of these projects.  After the completion of the SCADA project the well was able to be automatically controlled which improved the reliability and flexibility of the Summer Hill System.

There are several ways to compare the cost of electric use to operate these facilities.  We present several variations below in order to provide information that is objective.  One metric used is wire to water ratio.

When comparing wire to water ratios for these systems we must compare like periods of time.  This is necessary because the electricity at each of the sites also serves heating, cooling, lighting and plug loads.  In all cases the following was found to be true:

Comparing before and after implementation of the SCADA System, the electric cost to operate the Summer Hill systems remained relatively stable:

Comparing before and after implementation of the SCADA System, the electric cost to operate the Durham Ridge / Northbranch systems also remained relatively stable:

Comparing the integrated systems before and after completing the four projects is a bit more complicated.  It requires comparing the cost to operate the independent Country Greene and Cabin Run systems with the integrated Country Greene, Cabin Run and Landis Greene systems after completion of the four projects.  During the first and second quarter of 2013 the system controls were being tuned.  The electric use was somewhat higher than normal as a result of tuning the system.  Therefore, these periods were not included in the cost comparisons.  When making the comparison the following data were compiled:

Another cost comparison examines electric costs to operate the system 2008 and 2009 versus the year 2013 which is after the work had been completed for the integrated system.  It should be noted that the Township changed electric generation and transmission suppliers during 2009/2010.  Some of the reduction in cost is attributable to the selection of a lower cost electric supplier.  In this situation the kWh/Million Gallons provides a more reasonable comparison.

The following data were obtained from monthly electric bills.  The wire to water ratios were not calculated for this comparison.

Summed values for the integrated system:

The Township has experienced improved service to the Landis Greene service area and a reduction in electric cost for the Landis Greene, Country Greene, and Cabin Run integrated system.  This savings was significant ranging from 12 to 29 percent on a cost/millions of gallons produced basis.  The SCADA system resulted in approximately the same electric costs for the Summer Hill and Durham Ridge / Northbranch systems.

The Township and their system operator, Private Utility Enterprises, report all of the systems are more reliable.  The Summer Hill system has greater pressure stability as a result of the SCADA system.

We provide specialty engineering services to clients in the water and wastewater industry.

Our service offerings also include engineering for municipal facilities and educational facilities.

Learn more about us 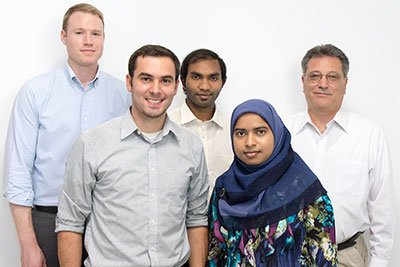